The plan was to go back and conquer the #WineDineHalf, the goal race that planned all our very first running around.  A race that we were literally soaked to the bone from head to toe, colder than the flash freeze of Arendelle at the hands of Elsa.  But wait a minute it wasn’t that bad!  You had a lot of fun and really enjoyed that race!  You said so right here!

Okay, okay so we did have a lot of fun 🙂 But we were not happy with our time and how we felt physically after that race.  So after our bump in confidence from #PrincessHalf and wanting to give our good friend Sergio ( who came up with the crazy idea to run Dopey before we turn 40) a runDisney experience before Walt Disney World Marathon Weekend, we decided to sign up for Wine and Dine Half.

The weekend was planned to be done on the super cheap so we drove down (spending on $80 US on gas one way!!), stayed off property at a cheaper hotel, and didn’t get Park tickets.  We arrived Thursday after  lunch and were VERY hungry!  So where’s the best place to go?  Well Earl of Sandwich at Disney Springs of course!  I highly recommend eating at one of their many locations if you ever get the chance!  You wont be disappointed!

Where do you go after 20hrs of straight driving to @waltdisneyworld & you're starving? Go to @earlofsandwichusa of course!

Friday Sergio treated us to tickets to Universal Studios!!! 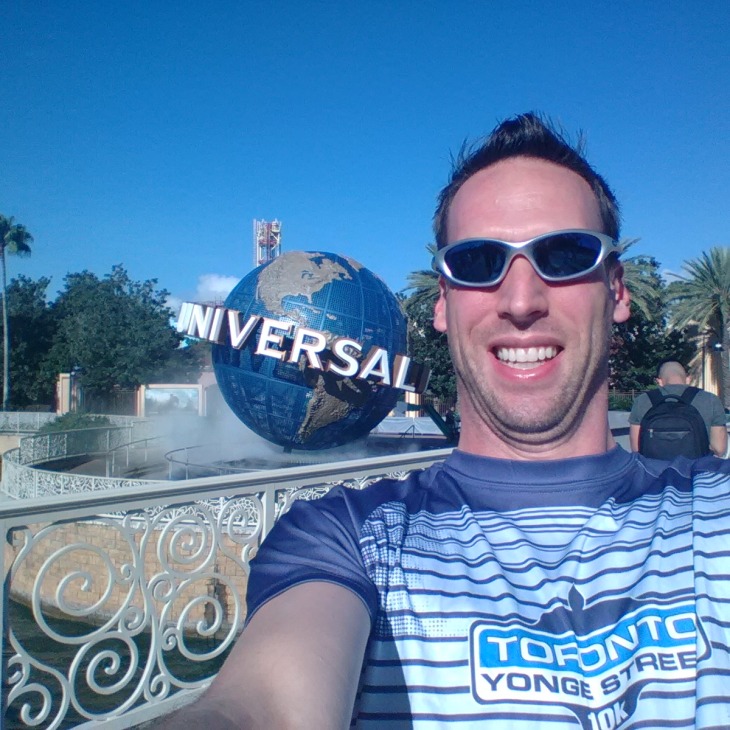 Karen and I had never been before and Sergio wanted to be our guide for our first trip much like he did for our first Walt Disney World trip! 🙂  We really enjoyed these two parks and all the crazy ride but we were really glad we tried it without the kids first!  While Universal does have quite a few rides for younger kids it felt to us like this place is more geared to the pre-teen and older category.  Perfect for us 3 since it meant we could go on any and all the crazy rides that were open.  We started the day at the main park and rode: The Simpsons Ride & Men in Black Alien Attack. Then we went off to see Diagon Alley! Wow did they ever put a lot of thought into the detail of this!  We were in aw from the moment we stepped into it!

Saturday!!  Race/Expo day!!  I always like going to the runDisney expos, mainly because we get to see Jeff Galloway and also because we get to checkout the latest runDisney & new balance merchandise.  We learned the hard way, however, to never go to an expo on the second day!  There was hardly any runDisney gear left at all!!  From now on we will always go first thing in the morning on the first day!  We did get to see Jeff Galloway though which we always loves!  I was so busy listening to him give us advice though that I forgot to snap a pic with him 😦 oh well I will definitely do that during the Dopey expo.  Changes with the speaker line up meant though that we missed Jeff’s formal talk!  We were very sad about this!  (Jeff didn’t even know until the morning, I think there were a lot of unhappy people that didn’t get a chance to see him since his talk was pushed earlier than what was printed).  We still got great Dopey advice though when we spoke to him personally at his booth. 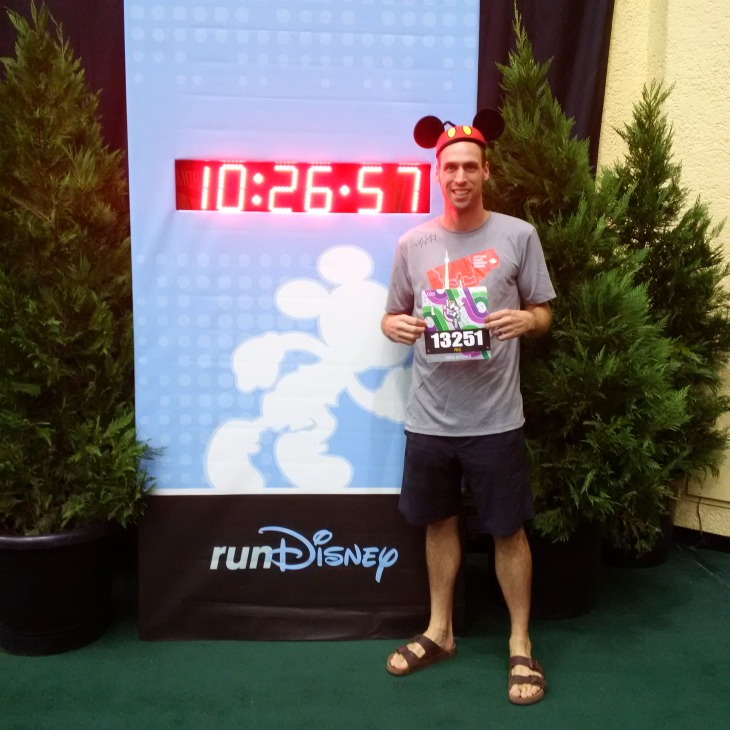 With bib in hand it was time for some lunch and a nap!

Man sure is nice to run a race in shorts and a t-shirt!  After we all ogt dressed we drove over to Epcot to park the and catch the shuttle to EPSN.  We got of the bus and headed over to bag check and got that all taken care of.  We had some extra time so we checked out the entertainment and the host for a while then went to the beginning of the line at the entrance tot he corals. We had this wicked plan, since we were in the last coral, to get to the very front so when they released everyone to the corals we could be at the front.  We stood at the front for a good 30 mins before the wind picked up.  and I mean PICKED UP!!!  The palm trees were bending over like crazy, a-frame signs were tipping over and cups and debris were blowing all over the roads.  Then we get word from the race official that the need to evacuate us to shelter???!!!  What the heck is going on???  All the runners were then escorted from the parking lot area back to ESPN zone to the baseball stadium. 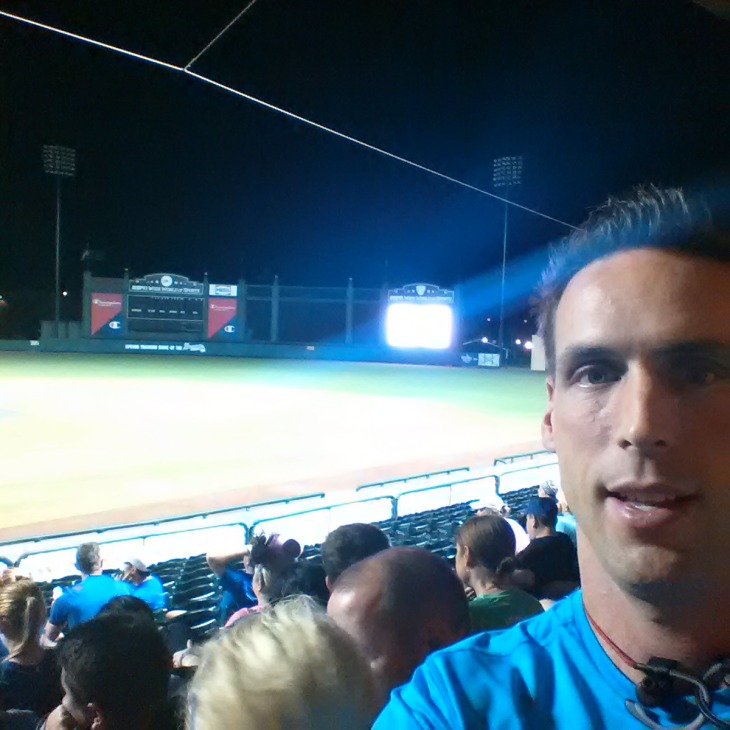 Waiting here for what seemed an eternity allowed us to scan social media and find out there was a big storm that was coming close to the route.  We later found out that there was a lot of lightening and the storm passed right over Animal Kingdom.  We were very worried that the race was going to be cancelled all together!  We didn’t get too many updates either and the ones we did get over the loud speakers we couldn’t even make out!  I like always tried to remain positive unlike someone I know …..

Finally the time came for us to go back to the holding areas so we goes filter into our corals. During the time while we were waiting in our coral we heard the dreaded announcement 😦 The race officials thought it safest to cut out the Animal Kingdom loop.  They were essentially cutting out 6 miles from the half marathon which essential made this now a 7.1 mile race!  Bummer ….  Not the worst news but not the greatest!  It was comforting to know that runDisney had our safety as their number one concern!

Our coral made it to the start line so that meant it was time for one last selfie! 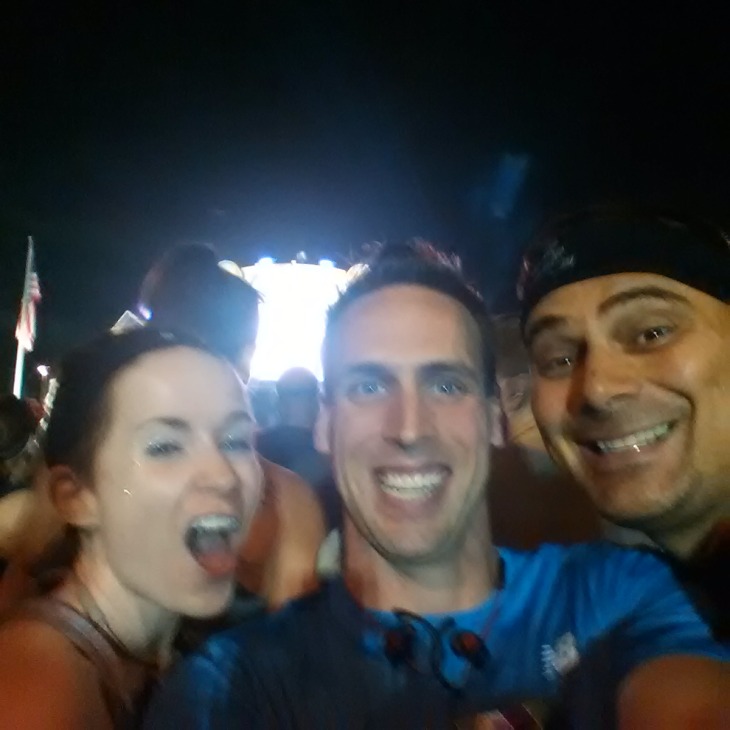 One of my favorite things about Disney races is the fireworks they blow off for every coral of each race and I finally caught ours on video.

We began to weave our way forward snaking our way through other runners and came to one of the character stops Lilo and Stitch!  Lets stop here and get a pic guys! 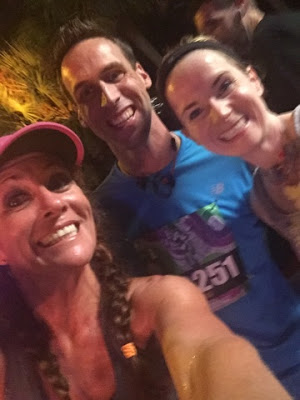 Really cool coincidence! @BamagirlRuns was in front in the line!

Later on  we found Woody and Buzz and stole a selfie with them out side the line since we didn’t want to wait!

One of my favorite things about running Wine and Dine is running through The Osborne Family Spectacle of Dancing Lights!

After the lights there isn’t that much farther to go as you run along the boardwalk and into Epcot to get your medal!  We were really disappointed to not see any Star Wars characters this year though! 😦 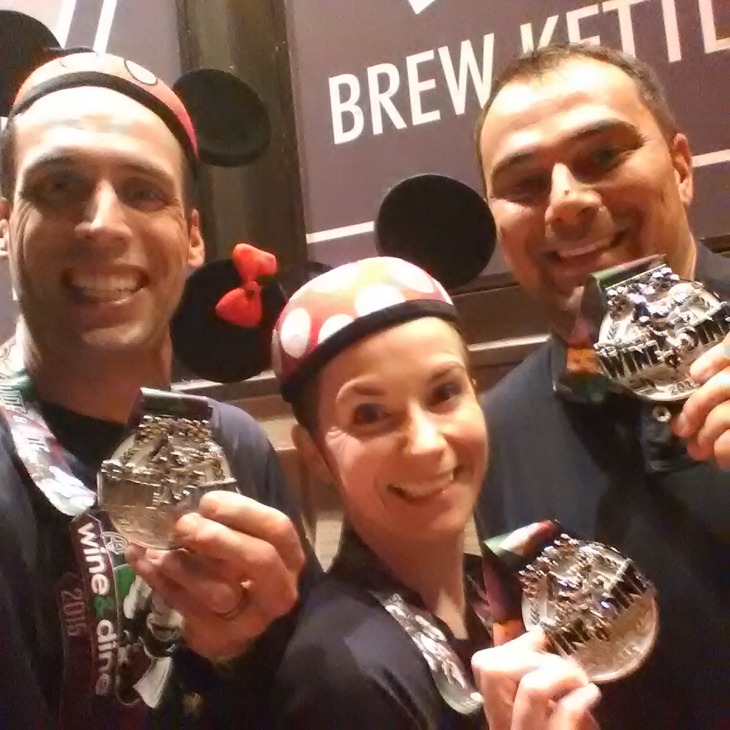 Medals in hand were were off to finally get the chance to see what the Epcot Food and Wine Festival was all about!  We sampled some amazing food and drinks and even got to go on some rides at 330 in the morning!  Not too many people can say they rode Soarin and Test Track at that time of day! 😉 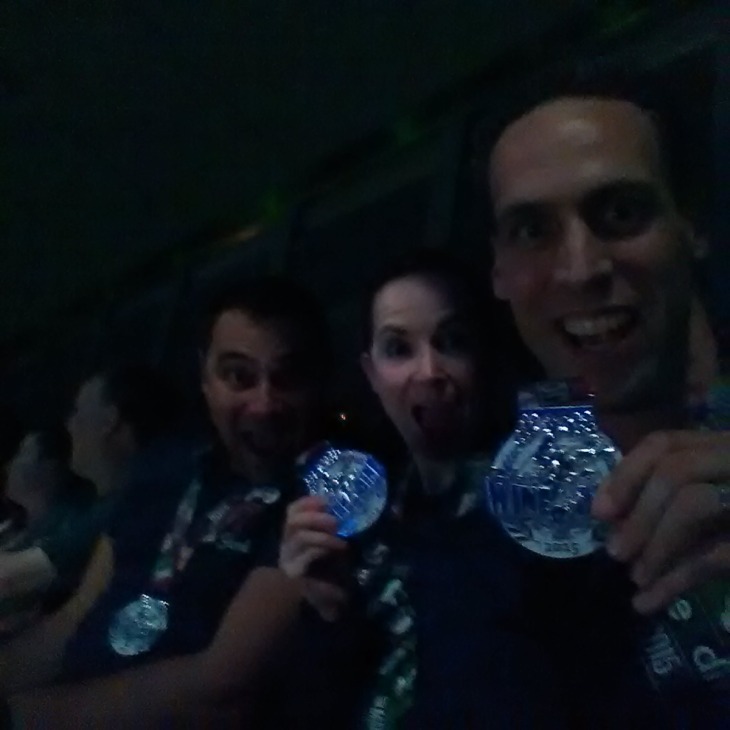 Just about to ride Soarin

Overall we still had a great time.  It was a severely shortened course and left us feeling a little unaccomplished at the end and I wish Disney would have moved some of the characters from the eliminated Animal Kingdom loop to soften the blow o the shortened course.  I really loved getting to experience the Food and Wine Festival this time since we couldn’t last time.  I also really loved getting onto some of the Epcot rides in the middle of the night!   Now that we’ve done this race twice I am not sure when we will be back.  I still highly recommend this race to people when I talk about it.  Its the only runDinsey race, so far, that happens at night, allows you to ride the rides at that time, gives you access to amazing food, its the only one that gives you a drink voucher for beer or wine  and is the only place licensed to serve alcohol so you can sample so other cool world drinks!  I can’t wait for Dopey in January and Star Wars in 2017!!!

Cause you gotta wear your medal around on the next day!

By Mike van Mil in Disney, Recap, Running on 2015/12/03.
← We are now marathoners! @RunCRS #STWM recap, a marathon of a post! Run Walk Ride with me at the @HSFRide this year & let’s #CreateSurvivors together! →

This site uses Akismet to reduce spam. Learn how your comment data is processed.

I am an Ambassador for: 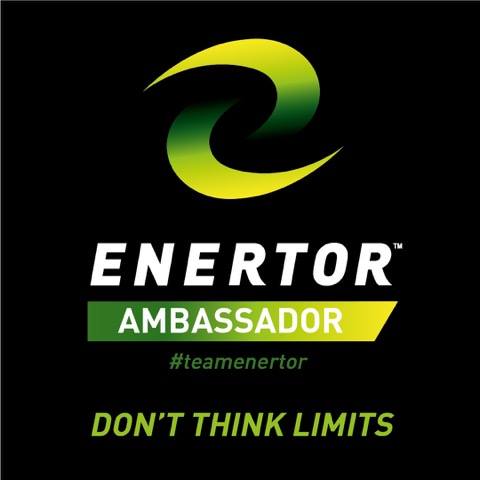 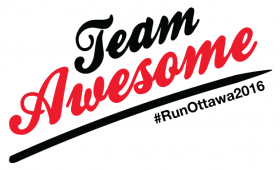